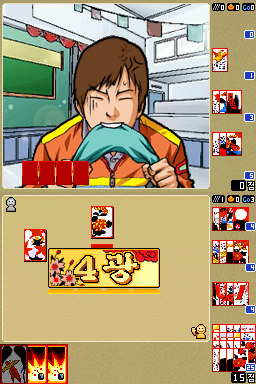 Watch Download (.dsm)
Author notes Discuss
3.22 / 10 Votes: 6
Touch! Gostop DS is a handheld version of the popular Korean card game Gostop, developed and published by CTGAME Entertainment in 2008.
In this run, perfectacle carefully manipulates luck to beat every ranked opponent as quickly as possible. For each opponent, a minimum amount of points must be obtained before being able to move on to the next one. Clever strategy and use of auto-wins are also used to rack up multipliers and obtain extravagant high scores in a remarkably short period.
Published on 8/6/2015
See full publication history
Game:
Touch! Gostop DS
Genres:
Strategy

Emulator Version:
desmume x86 0.9.7 svn4118
Webmasters, please don't link directly to the files. Link to this page or the front page instead.
Republication of movies from this site is only allowed under the following conditions:
Do not label them with speculations. If unsure, ask the site staff for details.