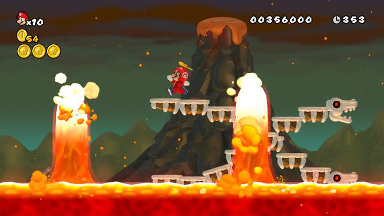 Watch Download (.dtm)
Author notes Discuss
6.88 / 10 Votes: 14
New Super Mario Bros. Wii is a 2009 side-scrolling platform video game developed and published by Nintendo for the Wii video game console. New Super Mario Bros. Wii follows Mario as he fights his way through Bowser's henchmen to rescue Princess Peach. Mario has access to several power-ups that help him complete his quest, including the Ice Flower, the Fire Flower, and the Starman, each giving him unique abilities. There are some new powerups to this game, such as the Propeller Hat which lets the player ascend very quickly. (You'll see a lot of that hat in this run.)
In this run, Soig obsoletes the previous publication from Got4n by 12 in game seconds with more optimized movement, despite the longer run time due to emulation differences. More information can be found in the submission text.
Published on 8/18/2015 12:00 AM
Obsoletes:
Wii New Super Mario Bros. Wii "warps" by got4n in 25:06.30

Tags:
Aims for in-game time instead of real-time
Takes damage to save time
Uses warps

Emulator Version:
Dolphin 4.0
Webmasters, please don't link directly to the files. Link to this page or the front page instead.
Republication of movies from this site is only allowed under the following conditions:
Do not label them with speculations. If unsure, ask the site staff for details.