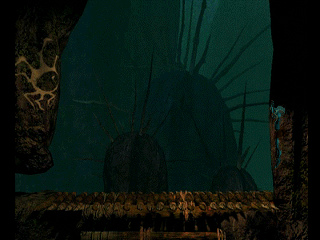 Watch Download (.bk2)
Author notes Discuss
4.46 / 10
Oddworld: Abe's Oddysee, a game released for several platforms, details the adventures of Abe, a Mudokon, attempting to save his race from slavery and other horrible fates at the hands of the evil Glukkons.
In this run, Samtastic rescues all 99 of Abe's fellow Mudokons, earning the good ending and unlocking some bonus features to boot.
This movie seemingly doesn't beat the previously published input time, due to playing on the new emulator, Bizhawk. But accurately speaking, this movie is 02:08.31 faster than the previous run.
If you like this movie, be sure to check out the other run of this game, where Samtastic & Dooty rush to the end of the game without caring about Abe's partners.
Published on 2/8/2016 12:00 AM
Obsoletes:
PSX Oddworld: Abe's Oddysee "100%" by Dooty in 1:03:27.07

Emulator Version:
BizHawk 1.11.1
Webmasters, please don't link directly to the files. Link to this page or the front page instead.
Republication of movies from this site is only allowed under the following conditions:
Do not label them with speculations. If unsure, ask the site staff for details.