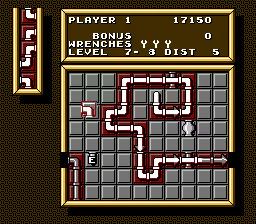 Watch on YouTube
Author notes Discuss
6.51 / 10
Pipe Dream is a game about keeping unsolidified jello in tubes long enough for it to solidify. More or less.
In this movie, Jules places pipes faster than a plumber on fifteen cups of coffee and only goes as far as absolutely required to contain the goo.
Unfortunately, the annoying music played though most of the game is the "turbo mode" music, and since turbo mode makes the goo flow faster, it can't be ignored in a run that aims for fastest time. It's a good idea to just turn off sound while watching this movie.
This movie stops after playing though all stages once. After that, the set of stages repeats endlessly, not unlike Elevator Action and Circus Charlie.
This run improves upon the previous publication by 00:40.90 seconds by using a new trick which enables the flooz to start flowing much quicker than normal.
Published on 4/6/2016 3:09 AM
Obsoletes:
NES Pipe Dream by Explosion Pills in 03:57.53