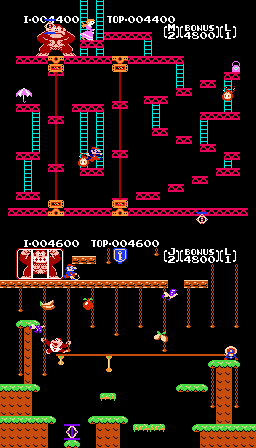 Watch Download (.fm2)
Author notes Discuss
6.4 / 10 Votes: 5.5
While the NES versions of Donkey Kong and Donkey Kong Jr. don't share the same amount of stages, they appear to be similar enough to be beaten at the same time with the same controller input.
This movie by newcomer Cyorter beats both games in record time.
If you like this movie, you may want to check out movies of other games in which as many as four games are played simultaneously with one controller.
Note: The encodes are stacked horizontally, even though the screenshot is stacked vertically.
Encoder's Note: There are multiple audio tracks included with the downloadable encodes. Track 1 is the combined audio of both games panned so that the left channel is the audio of Donkey Kong and right is that of Donkey Kong Jr. Track 2 contains Donkey Kong's audio and track 3 contains Donkey Kong Jr's audio.
Published on 4/2/2017
See full publication history
Game:
Donkey Kong & Donkey Kong Jr.
Genres:
Platform