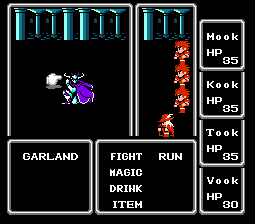 Download (.fcm)
Author notes Discuss
6.2 / 10 Votes: 1
Luck manipulation vs leveling up. Luck manipulation wins.
"Those of you not familiar with this game will be disappointed by the anticlimactic ending. There appears to be an uber-weapon that casts an uber-spell that kills literally everything in the game in one hit, even the final boss. It's pretty lame, though you can't exactly blame mookish for poor game design." -xebra
Published on 5/10/2005
See full publication history
Game:
Final Fantasy
Genres:
RPG