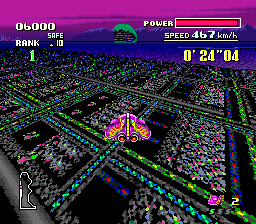 Watch Download (.lsmv)
Author notes Discuss
7.28 / 10 Votes: 5
F-Zero is a futuristic racing video game developed by Nintendo EAD and published by Nintendo for the SNES in 1990.
The game is normally played by selecting one of three leagues, known as Knight, Queen, and King leagues. This TAS plays through the second league. We also have a Knight League run.
The author provided a video commentary that was streamed on Twitch.
Published on 9/12/2017 12:00 AM
See full publication history
Game:
F-Zero
Genres:
Racing

Emulator Version:
lsnes rr2-b23
Webmasters, please don't link directly to the files. Link to this page or the front page instead.
Republication of movies from this site is only allowed under the following conditions:
Do not label them with speculations. If unsure, ask the site staff for details.