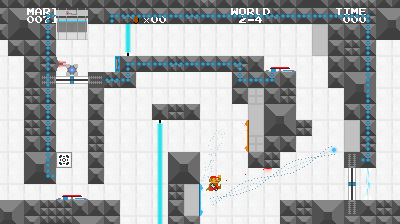 Mari0 is a PC game created by stabyourself.net in 2012 that combines the classic Super Mario Bros. with the puzzle-platfomer Portal by giving Mario a portal gun. The game launched with 2 "mappacks", with the one most people played being the Super Mario Bros. mappack containing the original set of levels. This TAS instead showcases the other mappack which features 18 Portal-inspired puzzles spread across 9 different levels.
lexikiq and Masterjun certainly don't solve the puzzles in the Portal mappack the intended way in order to clear it in record time. Please read the authors' comments for more details.
Published on 10/28/2018 12:00 AM
See full publication history
Game:
Mari0
Genres:
Platformer
Puzzle
Unofficial game

Emulator Replay:
libTAS 1.3.1
Download (.ltm)
Webmasters, please don't link directly to the files. Link to this page or the front page instead.
Republication of movies from this site is only allowed under the following conditions:
Do not label them with speculations. If unsure, ask the site staff for details.