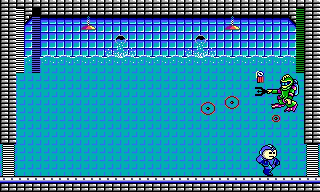 Watch Download (.jrsr)
Author notes Discuss
5.91 / 10 Votes: 9
This is a Mega Man game that was not developed by Capcom, but rather by Stephen Rozner of Hi-Tech Expressions, who did all the design, programming, graphics, and sound. The game is infamous for its mediocre quality.
In this run, David Fifield shaves 36.61 seconds off the previous movie. The majority of the savings come from a glitch that allows most of Volt Man's stage to be skipped. Other improvements include better movement throughout the stages and faster boss fights.
This game runs too fast on anything more modern than a low-end 386 or so. As such, the encode is technically correct.
Published on 1/10/2019 12:00 AM
Obsoletes:
DOS Mega Man by DarkKobold in 02:23.55

Emulator Version:
JPC-RR 11.6-WIP (commit bf3a341ad233439e21a32f33df
Webmasters, please don't link directly to the files. Link to this page or the front page instead.
Republication of movies from this site is only allowed under the following conditions:
Do not label them with speculations. If unsure, ask the site staff for details.