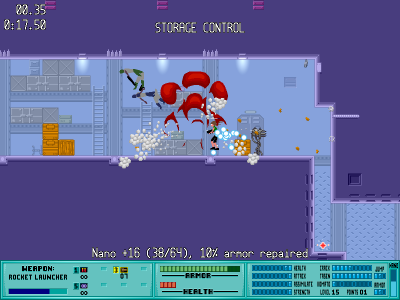 Watch on YouTube
Author notes Discuss
6.7 / 10
Iji is a freeware game released by Daniel Remar in 2008. Quoting his website, where the game can be downloaded: "Iji is an action-packed strategic platform shooter with a detailed story, large levels with multiple paths, powerful bosses and lots of secrets. There are alternate gameplay events, dialogues and scenes depending on what you do, a wealth of extras and bonus features, and seven stats to upgrade through a leveling system. Iji herself has superhuman strength and abilities, and can crack Nanotechnology, use her enemies' most devastating weapons against them, and be a pacifist or a killer - the story adapts to how you play."
Due to a change in ending timing between this movie and the one it obsoletes, this is actually an improvement of 44.3 seconds over the previous movie, thanks to better optimisation and better health and nano management.
Published on 6/16/2019 12:00 AM
Obsoletes:
Windows Iji by Matslo123 in 27:41.87

Emulator Replay:
Hourglass-r81
Download (.wtf)
Webmasters, please don't link directly to the files. Link to this page or the front page instead.
Republication of movies from this site is only allowed under the following conditions:
Do not label them with speculations. If unsure, ask the site staff for details.