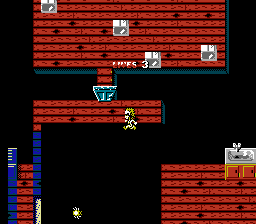 Watch Download (.bk2)
Author notes Discuss
6.08 / 10 Votes: 4
Based on the 1988 Michael Keaton movie, Beetlejuice follows the rough storyline of the movie. A ghoul named Beetlejuice is hired by a recently deceased couple to scare away the new occupants of their old home. The game is a side scrolling action game where the lead character can run, jump, and stomp his way through the house while collecting "scare points" to help in his ultimate goal. The house is equipped with all manner of traps including incinerating lasers, and even the torches hurt.
ktwo improved the predecessor movie by 00:07.47 seconds.
Published on 7/2/2019
Obsoletes:
NES Beetlejuice by ktwo in 07:21.26

Emulator Version:
Bizhawk 1.13.1
Webmasters, please don't link directly to the files. Link to this page or the front page instead.
Republication of movies from this site is only allowed under the following conditions:
Do not label them with speculations. If unsure, ask the site staff for details.