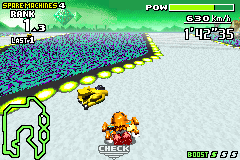 Watch Download (.bk2)
Author notes Discuss
6.96 / 10 Votes: 7
F-Zero Maximum Velocity is a futuristic racing video game developed by NDcube and published by Nintendo for the Game Boy Advance. The game was released in Japan, North America and Europe in 2001. It is the first F-Zero game to be released on a handheld game console.
The Grand Prix is the main single player component of Maximum Velocity. It consists of four series named after chess pieces: "Pawn", "Knight", "Bishop" and "Queen", each having five races in four difficulty settings. This time, Memory uses the best unlockable machine at the hardest difficulty setting to blaze through the Knight tracks of the Grand Prix mode.
Published on 7/23/2020 12:00 AM
See full publication history
Game:
F-Zero: Maximum Velocity
Genres:
Racing

Tags:
Aims for in-game time instead of real-time
Takes damage to save time
Uses hardest difficulty
Starts from a saved state or SRAM

Emulator Version:
Bizhawk 1.12.2
Webmasters, please don't link directly to the files. Link to this page or the front page instead.
Republication of movies from this site is only allowed under the following conditions:
Do not label them with speculations. If unsure, ask the site staff for details.