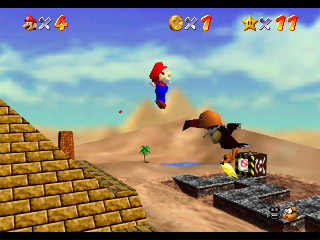 Watch Download (.m64)
Author notes Discuss
8.74 / 10 Votes: 71
Ever wonder if Mario was actually a ninja wearing blue overalls? Now you know.
This run completes the game after collecting a mere 16 stars. It was originally intended that the player collect a minimum of 70 to finish, but a few bugs allow Mario to pass through doors and barriers that require a minimum number of stars to open.
Mario has a very wide range of skills for mobility and some of the physics of this game are easily abused by an experienced player.
Published on 11/21/2005
See full publication history
Game:
Super Mario 64
Genres:
Platform