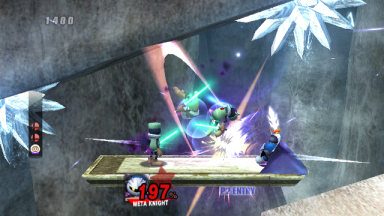 Super Smash Bros. Brawl is the third installment in the Super Smash Bros. series, released for the Wii in 2008. While its core mechanics are the same as its predecessors (where the genre’s traditional health bar is replaced with a percent counter, with the goal of knocking opponents off the stage instead of reducing their HP to zero), Brawl changed many aspects of the game from Super Smash Bros. Melee, resulting in the game generally being considered the "slowest" in the series as a result.
Brawl is the first game in the series to have a dedicated story mode, called "The Subspace Emissary", which is the main focus of this TAS. The Subspace Emissary is mostly composed of side-scrolling platforming levels with cutscenes and beat-’em-up sections called "Ambushes" - similar to games like Kirby Super Star - while also containing the traditional versus matches and bosses like its predecessors.
DyllonStej takes advantage of oversights in the game's damage mechanics, which allows for extreme travel speed without being KO'd, in order to literally fly through the game at record-setting speed. Pervasive luck-manipulation throughout the movie ensures that the author always gets the right item or sticker to go even faster. The author's submission notes are voluminous and detail the incredible amount of technique that went into making this movie, and are well worth the read.
Published on 1/8/2021 12:00 AM
See full publication history
Game:
Super Smash Bros. Brawl
Genres:
Fighting
Platformer

Emulator Version:
Dolphin 5.0 Lua + TAStudio
Webmasters, please don't link directly to the files. Link to this page or the front page instead.
Republication of movies from this site is only allowed under the following conditions:
Do not label them with speculations. If unsure, ask the site staff for details.