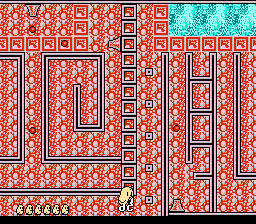 Watch on YouTube
Author notes Discuss
7.34 / 10
In this game, also known as The NewZealand Story, you control a kiwi bird and rescue other kiwi birds trapped within the level. There are numerous warps, used to cut this game many minutes short of its expected completion time.
The ceiling and wall physics are very similar to Bubble Bobble, which means some of them can be passed through when you wouldn't expect it. In addition to this, there is a glitch that sends you through the floor, saving a lot of time in the final stages.
You can watch the complete run being played back on a console.
Published on 4/18/2021 12:00 AM
Obsoletes:
NES Kiwi Kraze: A Bird-Brained Adventure! by Jules in 02:18.97

Emulator Replay:
FCEUX 2.3.0
Download (.fm2)
Webmasters, please don't link directly to the files. Link to this page or the front page instead.
Republication of movies from this site is only allowed under the following conditions:
Do not label them with speculations. If unsure, ask the site staff for details.