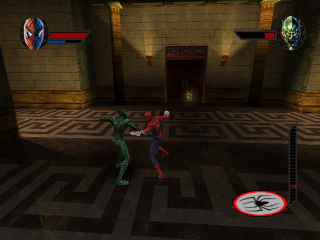 Watch Download (.dtm)
Author notes Discuss
7.81 / 10 Votes: 4.5
Spider-Man is based on the 2002 movie of the same name, featuring Tobey Maguire as Peter Parker.
The game is a beat-em-up that expands the plot of the film, featuring villains that didn't make it into the movie. The player navigates the game by web slinging, zipping, and crawling along walls, only stopping long enough to beat up baddies and collect upgrades.
Natetheman223 employs laser-accurate web skills and a trick that lets Spiderman pass through solid walls with the help of unwitting mooks to complete the game in record time.
See also the author's 100% run and Green Goblin playthrough.
The author has provided audio commentary on this run, which can be seen here.
Published on 6/1/2021
See full publication history
Game:
Spider-Man
Genres:
Action