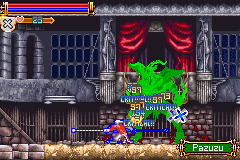 Watch on YouTube
Author notes Discuss
9.5 / 10
Castlevania: Harmony of Dissonance is the second Castlevania game to appear on the Game Boy Advance. Along with the main story mode is Boss Rush mode, which is unlocked after completing the story mode once. In Boss Rush mode, you can face a gauntlet of bosses from the story that you have to defeat as fast as you can. There are three difficulties to Boss Rush mode, each of which have their own different set of bosses.
In this run, Tarion plays Boss Rush mode on the Hard difficulty, which includes every major boss fight from the story. Various glitches and copious amounts of RNG manipulation are performed to put down each boss as fast as possible.
There is also a run where Simon Belmont is used instead of Juste.
Published on 4/19/2022 12:00 AM
See full publication history
Game:
Castlevania: Harmony of Dissonance
Genres:
Action
Platformer
RPG

Emulator Replay:
VBA-RR v23.6 svn480
Download (.vbm)
Webmasters, please don't link directly to the files. Link to this page or the front page instead.
Republication of movies from this site is only allowed under the following conditions:
Do not label them with speculations. If unsure, ask the site staff for details.