NES Might and Magic: Secret of the Inner Sanctum "item glitch" by katsuster in 07:32.39 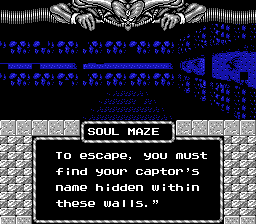 Watch on YouTube
Author notes Discuss
6.5 / 10
Might and Magic, released in 1986, was the first installment in the series that would later evolve into a whole fictional universe, encompassing both the actual M&M games and a multitude of subseries and spin-offs made in their own genres, including King's Bounty, Heroes of Might & Magic, and others.
Normally, this game is rather long. This movie by katsuster skips most of it by using a glitch that allows the player to get all the important items in a matter of a few minutes. It also improves on the previous run that used the same glitch by optimizing the usage of the glitch and by utilizing subframe inputs to skip messages faster. For more details, you can read the author's notes.
katsuster has also provided an encode of the run that has a map and important values next to the gameplay.
Published 15 days ago
Obsoletes:
NES Might and Magic: Secret of the Inner Sanctum "item glitch" by Dammit in 08:06.91

Emulator Replay:
BizHawk 2.7.0
Download (.bk2)
Webmasters, please don't link directly to the files. Link to this page or the front page instead.
Republication of movies from this site is only allowed under the following conditions:
Do not label them with speculations. If unsure, ask the site staff for details.