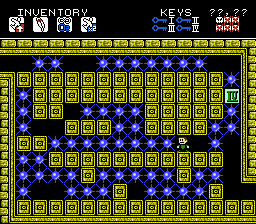 Watch on YouTube
Author notes Discuss
6.9 / 10
Battle Kid: Fortress of Peril may look old, but it's actually released in 2010! Mainly inspired by the PC game I Wanna Be the Guy, this game is classic platforming action, where anything can kill the player in one single hit. While it's not unfair (as opposed to I Wanna Be the Guy), it's still really hard.
In this run, Aglar and Fortranm use a password provided by the game once it is beaten to access the secret level named "Petunia X" (slightly modified and renamed "Golden Fort" in the Japanese release) and beat it as fast as they can.
Watch this run being played back on a real console.
Published on 6/30/2022 12:00 AM
See full publication history
Game:
Battle Kid: Fortress of Peril
Genres:
Platformer
Unofficial game