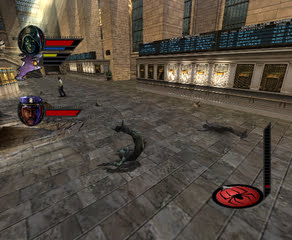 Watch on YouTube
Author notes Discuss
7.5 / 10
Spider-Man is based on the 2002 movie of the same name, featuring Tobey Maguire as Peter Parker.
Completing this game on the "Hero" difficulty or higher unlocks a New Game+ mode that lets the player take control of Harry Osborn (voiced by Josh Keaton) in the Green Goblin suit, complete with the Glider and Goblin Bombs! This New Game+ mode features a new storyline where Harry must stop a "mysterious" adversary, who just happens to sound a lot like Willem Dafoe, in another Green Goblin suit.
This run is a 2 minute and 33 second improvement over the previous movie.
This run uses a special Green Goblin suit from the Alex Ross comics. This suit normally isn't available on the Gamecube version, however it can be rendered usable through use of an Action Replay code.
Published on 8/10/2022 5:46 PM
Obsoletes:
GC Spider-Man "Green Goblin" by Natetheman223 in 23:20.28