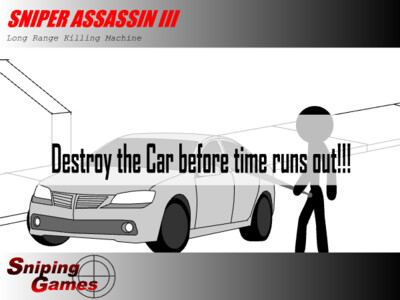 Watch on YouTube Watch No Scope View
Author notes Discuss
3.2 / 10
Published on 11/17/2022
Sniper Assassin 3 is the sequel to Sniper Assassin 2, and part of the Sniper Assassin series of games as part of the Flash sniper assassin subgenre. It continues where Sniper Assassin 2 left off, as the protagonist continues to kill and torture his way through many mooks as he avenges his wife's murder. This time, his crusade is ramped up in scale as he commits vandalism and more varied strategies of torture, all in the name of taking down his wife's murderers.
Spikestuff completes the game as a fast as possible with the help of a level skipping glitch that happens when level progression is done too quickly after killing a certain number of enemies in a level.
There is also an encode that removes the scope view and leaves only the reticle with the use of a modified SWF file.
See full publication history
Game:
Sniper Assassin 3
Genres:
Action
Shooter

Emulator Replay:
libTAS v1.4.4 // ruffle-nightly-2022-10-10
Download (.ltm)
Webmasters, please don't link directly to the files. Link to this page or the front page instead.
Republication of movies from this site is only allowed under the following conditions:
Do not label them with speculations. If unsure, ask the site staff for details.