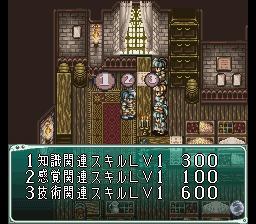 Watch Download (.smv)
Author notes Discuss
4.83 / 10 Votes: 23
Tri-Ace's Star Ocean 1 is an RPG game similar to Namco's Tales of Phantasia or Square's Final Fantasy VI.
Because it was only released in Japan, and the first (almost) complete fan translation of the game was finished only a few years ago, this game isn't well known in western countries. Moreover, it has only been supported by SNES emulators for a short time, due to a graphics compression chip used in the game to fit the huge amount of beautiful graphics into the 6 MB ROM chip.
This is a tool-assisted speedrun of the Japanese version (the rules of the TASvideos site forbid the use of fan-translations when making speedruns).
We are sorry for the broken speech in the game intro. This is an emulation glitch. (Yes, the game actually includes English dialogue, which coincidentally has an identical twin in Star Trek.)
For a guide of the strategy used in this run, please read the author's comments.
As usual with RPG runs, we recommend everyone to first play through this game before watching the movie. It will normally take a few days to complete the game once ― a few months to uncover all the features: secret characters and abilities and items. Beware, it's fun, and addictive.
Published on 3/3/2006
See full publication history
Game:
Star Ocean
Genres:
RPG