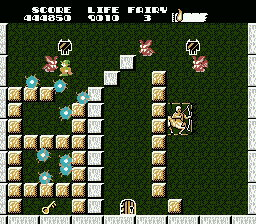 Watch on YouTube
Author notes Discuss
6.24 / 10
Solomon’s Key is a puzzle platform game with an old clumsy magician who has the power of creating and destroying platforms. And through that power, he saves the world.
This movie plays all the rooms of the game, including the hidden rooms with Page of Time, Page of Space, and even a princess of some kind. (Fairy collection rooms were not included.) No warps were used. Due to those secrets, it accomplishes the best ending of the game.
Almost all rooms were improved from the previous movie ― many of them even several seconds faster. The precise times can be found in the submission message.
NOTE: In case you are wondering, the author could have used death as a shortcut in one room like he did in the previous movie, but chose not to.
Published on 3/12/2006 2:51 PM
See full publication history
Game:
Solomon's Key
Genres:
Platformer
Puzzle