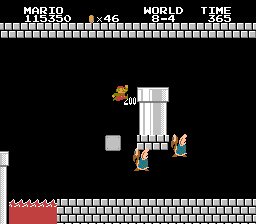 Watch on YouTube
Author notes Discuss
2.5 / 10
This is a historic movie, submitted and obsoleted before the creation of the database-based (and wiki-based) site engine, before July 2004.
It was inserted to the database in a history revival project by Bisqwit in autumn 2006.
This marks the third SMB movie by Bisqwit and is approximately 2 seconds faster than his first. It does not take advantage of many glitches & tricks known in modern times but does a good job focusing on entertaining the audience while not losing time.
The improvement from the previous movie seems to be simply the removal of a few seconds mistake/entertainment decisions in world 8 (where Bisqwit chose to play around with a koopa shell or hit a random coin block).
Published on 1/14/2004 8:29 PM
Obsoletes:
NES Super Mario Bros. "warps" by Bisqwit in 05:15.60