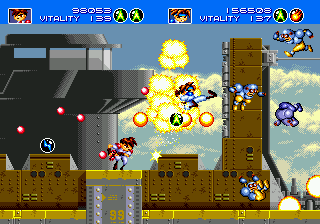 Watch Download (.gmv)
Author notes Discuss
7.84 / 10 Votes: 38
Gunstar Heroes (1993) is widely considered to be one of the best action games on the Sega Genesis, but, ironically, was commercially unsuccessful due to poor promotion. It features a variety of melee attacks, as well as 4 basic weapons which can be combined in pairs (making a total of 14 combinations) — all densely packed in a swift and explosion-heavy gameplay spanning over seven uniquely designed stages. The author takes special care to showcase all the moves the game is capable of, using every possible attack and having lots of fun playing around in autoscrolling sections.
This movie is 3 minutes longer than the previous one due to playing on hardest difficulty and using both Gunstars at the same time. See the author's comments for more details.
The encodes for this movie are also slightly larger than usual — this is due to an amount of colors and on-screen motion even the best codecs have problems coping with.
arkiandruski has provided an audio commentary for this movie, available here. He watches his run's encode and speaks along, play back your own copy as you listen to him.
Published on 8/18/2007 12:00 AM
Obsoletes:
Genesis Gunstar Heroes "1 player" by Jackic in 32:59.00