GBA Castlevania: Circle of the Moon "warp glitch" by Cardboard, zggzdydp in 05:22.95 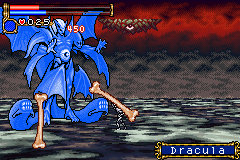 Watch on YouTube
Author notes Discuss
6.61 / 10
Published on 9/25/2007
When played normally, Castlevania: Circle of the Moon is a rather long game, in which exploration, leveling up, and killing bosses in order to gain access to different items or portions of the castle is necessary. However, series of glitches involving DSS combos throw all these aspects of gameplay out of the window, allowing the player to warp directly to Dracula and kill him humiliatingly in just over 5 minutes.
This movie is a joint venture between Cardboard & zggzdydp, in which 11.2 seconds were saved over the previous version by OgreSlayeR.
Obsoletes:
GBA Castlevania: Circle of the Moon "warp glitch" by OgreSlayeR in 05:34.13