(Link to video)
In Cheetahmen II the player again assumes the role of one of the three Cheetahmen (Aries, Apollo and Hercules); after defeating a boss at the end of the second level, they switch to the next Cheetahman for the following two levels, as in the Action 52 version. Due to a bug, it is impossible to get to the levels in which one plays Cheetahman Aries without altering the ROM image or experiencing a glitch that very rarely starts the game on these two levels. Though PacoChan released fix patch in order to able to play other 2 levels. You have to download the patch from here to play this movie.

Stop Walking: Enemy spawns are determined by frames or your character x position. So you should stop walking to manipulate enemy spawn. This is used in Level 4~6.
Infinite Jump: Physical attack can be cancelled with jump then you can do attack, cancel repeatedly. Apollo can't use this glitch.

114 frames faster than my previous run (you need nico account). I switched FCEUX to Bizhawk but there were no extra/reduced frames as far as I looked.

Improvements in Stage by stage

Using walking trick in some places. This allowed me not to kill or jump over enemies later. (68 frames saved, 76 frames in total)

Walk tricks could reduce waiting frames and jump to cancel attack in Dr. Morbis fight. (38 frames saved, 114 frames in total)
Noxxa: Judging.
FractalFusion: Added Nicovideo module.
Noxxa: As stated in the previous submission's comments, the hack that allows completing the full game can be used to obsolete it. Therefore, accepting this run to obsolete the previous publication.

Experienced Forum User
Joined: 6/4/2004
Posts: 284
I find it so appropriate that the last level has the Cheetahmen kill the Action Gamemaster (shut up, it's personal canon), and then immediately get a game over. Yes vote.
Posted: 3/17/2013 2:43 AM
Quote

Nice run. I thought it was entertaining, so yes vote. I'm glad you decided to run the patched version too; it's interesting to finally see the fifth and sixth levels.
Posted: 3/17/2013 6:12 PM
Quote

He/Him
Editor, Experienced Forum User
Joined: 6/23/2009
Posts: 2215
Location: Georgia, USA
It's good to see a run on the bugfixed version. The health bar looks a lot better, and the Aries stages are fairly interesting since they have so many enemies. However, those stages do feel pretty sloppy too. I can't say anything about whether the run is optimized. With a game this clumsy, even optimal play is going to look bad. I'd say this gets a Meh for entertainment. It has novelty, but ultimately the run has fairly few ways to show off.
Used to be a frequent submissions commenter. My new computer has had some issues running emulators, so I've been here more sporadically. Still haven't gotten around to actually TASing yet... I was going to improve Kid Dracula for GB. It seems I was beaten to it, though, with a recent awesome run by Hetfield90 and StarvinStruthers. (http://tasvideos.org/2928M.html.) Thanks to goofydylan8 for running Gargoyle's Quest 2 because I mentioned the game! (http://tasvideos.org/2001M.html) Thanks to feos and MESHUGGAH for taking up runs of Duck Tales 2 because of my old signature! Thanks also to Samsara for finishing a Treasure Master run. From the submission comments:
Posted: 3/19/2013 3:40 PM
Quote 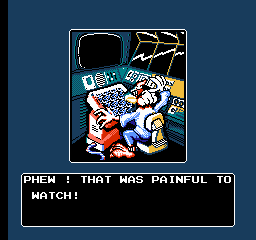 Warning: When making decisions, I try to collect as much data as possible before actually deciding. I try to abstract away and see the principles behind real world events and people's opinions. I try to generalize them and turn into something clear and reusable. I hate depending on unpredictable and having to make lottery guesses. Any problem can be solved by systems thinking and acting. If TASing is meta-play, TASVideos Movie Rules are meta-meta-play!
Posted: 3/19/2013 4:25 PM
Quote

Any
Experienced Forum User
Joined: 6/30/2010
Posts: 1067
Location: Zurich, Switzerland
This is probably the worst game I've ever seen (I mean, even E.T. can at least be finished). It definitely had a "so-bad-it's-good" vibe to it, but that doesn't prevent the movie from being monotonous. Besides that, I agree that it doesn't look completely optimized. If the run was faster, I could easier accept the uninteresting gameplay. Guess that's a meh vote for me.
Current project: Gex 3 any% Paused: Gex 64 any% There are no N64 emulators. Just SM64 emulators with hacky support for all the other games.
Posted: 3/19/2013 5:28 PM
Quote

Experienced Forum User
Joined: 5/2/2009
Posts: 656
I love how fans takes their "jobs" way more seriously than Active Enterprise took theirs
My first language is not English, so please excuse myself if I write something wrong. I'll do my best do write as cleary as I can, so cope with me here =) (ﾉಥ益ಥ）ﾉ
Posted: 3/23/2013 5:44 AM
Quote

Game made no sense to begin with taking the broken pixels come from the patch. Makes this the perfect image.
Disables Comments and Ratings for the YouTube account. These colours are pretty neato, and also these.
Posted: 3/23/2013 2:55 PM
Post subject: Movie published
Quote