Pink Panther in Pink Goes to Hollywood is a 2D Platformer.
In the Genesis Version you have a boxing glove weapon.
When you are using the weapon your position will be slightly shifted forwards, this is used for one shortcut in this run. You can get onto platforms which are slightly higher than your maximum jump height when there is a barrier in the platform. In that case you can turn away from the barrier, jump upwards, shoot your weapon and hold right while the weapon is stretched.

The fastest ways to move are (Descending):

This run is completed with the hardest difficulty (4 Health Points), it only makes a difference of a few seconds in the final refrigerator part.

The most interesting part of this level is the Boss Fight. Just before entering the fight I collect a power up. That powerup increases my weapons range temporarily which I demonstrate afterwards.
There are pipes which push you away under and above the boss (indicated by the bubbles), however you can swim between them without being pushed back. This way I manage to kill the boss in one cycle.

Not much to say about this level other than that the game forces you to use the carpet to proceed.

There's an interesting trick in this level: By jumping upwards from the very left house roof I trigger the flying cows. By making sure that they are not too far away
from Pink I ensure that they don't disappear. You are supposed to go through the mine and then get on the platform above them, this trick saves over a minute of time.

One interesting trick: I skip getting the bridge coin by jumping directly onto the lowest platform of the ship's mast.

CAT ON A HOT PINK ROOF:

A quite short level, I use the weapon once to avoid getting hit by the lightning.

I defeat the boss in this level before starting the fight.
That is possible because he is supposed to come out of that room once you are inside the arena. For some reason he is already placed inside there and is vulnerable.

I found a nice shortcut in this level. By jumping from the dragon head to the right I can jump over the wall and skip some platforms.
Masterjun: Judging.
Masterjun: Nice entertaining fast-paced game. The run shows off precise movement optimizations. Not a lot of viewer feedback but this movie is a fitting run for our site. Accepting to Moons.
Fog: Processing for Stovent.

Experienced Forum User, Experienced player (753)
Joined: 10/13/2014
Posts: 408
Location: nowhereatthemiddleofnoone
hi, I viewed than you had submit, snes & genesis versions, I think Pink on genesis must have more levels than snes, because you finish with more frames, but in reality it have less levels than snes!! I don't had a time to watch this 2 submissions and i think watch snes & genesis, but if you know the differences for this 2 games, then maybe genesis is useless? Or, maybe, that are a very different games?
GAW sms... Totally destroyed
Posted: 7/2/2017 3:21 AM
Quote

Experienced Forum User, Player (188)
Joined: 10/9/2016
Posts: 6
They are entirely different games, only the music and the level themes are the same. The level structures are completely different, the reason why the Genesis version is longer is that most of its levels are bigger and longer. There were also two extra boss fights added for "PINK LEMONADE" and "JUNGLE PINK". Additionally when entering a level (except for "REFRIGERATOR") you will have to go through a backstage room and reach another door before getting to play the actual level. Both versions have the same amount of main levels, if you count the sub levels SNES would have two more, "PINK RANGER HOTEL" and "PINK CHILL".
Posted: 7/2/2017 10:13 AM
Quote

Experienced Forum User, Experienced player (753)
Joined: 10/13/2014
Posts: 408
Location: nowhereatthemiddleofnoone
Hi and welcome to TAS.org! This run is good and I find the genesis version, is more entertaining than snes, Because it's more easy to understand than Pink is an actor, due to a levels transition, with a cameras and projectors, levels are more big, but very fast & bosses are more interresting! Snes is good, but i have less interest for this version & it haven't difficulty levels. Good job, but the only problem, when I watch your work on this 2 versions, I find than it's pity when you stop move to wait the good moment for can continue ( exemple: In mines, on genesis, you wait an wagon, and for this, you stop to move, and under water when the ship down, you stop!), in TASing, you can watch the future, and for this reason, you can doing some stuff, like lose time to go past at the best moment, like on snes, when you had need cow boy's boots to create a long jump to go past, to other side, and finish level more fast, you can walk and follow this enemy at the hitbox's limite, you create an entertaining, and don't stop for nothing! Vote yes, because i can understand this error and your runs are well optimised!
GAW sms... Totally destroyed
Posted: 7/3/2017 4:36 PM
Quote

Any more feedback? This and the SNES submission look good for Moons.
Warning: Might glitch to credits I will finish this ACE soon as possible (or will I?)
Posted: 7/4/2017 8:42 PM
Quote 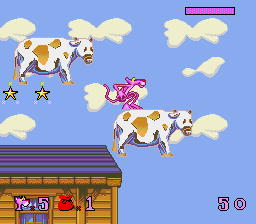