Vote: Did you like watching this movie? (Vote after watching!)
Submission Text Full Submission Page
This run beats the current published one by Jecy by 149 frames (2.48333... seconds).
Suggested screenshot: frame 31291 (Pacman's revenge?)

Batman for NES consists of 12 levels full of action, add to that six bosses and this game is a real challenge. For a game made in 1989 it also has amazingly good graphics and music.

The citizens of Gotham City are preparing themselves for the 200th anniversary of its City festival. Suddenly came stupid stupid Joker and created terror in the town. As if that wasn't enough he was the one who killed the parents of the Town's hero number 1 - Batman. Thus it's Batman's task to stop the evil Joker to bring peace to Town and avenge his parents.

Semi long reach weapon that works really good on enemies that have just semi long distance to you. When it's inside an enemy it takes 1 damage every forth frame.

Long reach weapon that's mostly used to because it's cheaper than the 3-way weapon, or perhaps reducing lag. But it also has a special feature in that it can sometimes (with frame presision) hit enemies that are directly above or under you. This deals a damage of 2.

Stronger long reach weapon than the gun, it's also faster and it can hit even the shortest enemies on the ground. Damage dealed: 3.

The winner in close combats. The damage taken by enemies works in the that if an enemy is with the fists detection area 6 frames after you've started the attack it will take 2 damage. If the enemy after that still is in that area it will take another damage of 2. For some enemies you just take 1 damage at the time however.

I decided to stick with Jecy's rule number 1 - do not take any damage. By having it this way the two runs are more comparable, and from what I saw there's only one scenario in the whole game where taking damage can save time - beginning of level 4-3, perhaps also one on level 2-3 but I didn't test that since taking damage was never an option.
Also worth to mention is that the undo count shown here is about twice as low as the reality would tell, since I competed with myself on at most four moviefiles at the same time and then submitted the one with most rerecords.

I'm pretty sure that this level is perfect (strong words!) if not a suitable glitch is discovered. There's no frame of lag at all, the jumps are always as high as possible and the number of jumps are absolutely as small as possible.

From the start to the upper left corner, no frame is gained. Then at the scenario when I'm jumping up the platforms I manages to reduce 7 frame of lag by jumping backwards. 1 frame of route was also gained there.

I kill the boos with the weapons (in order) 3-way, batarang, batarang, 3-way, fists. I also took advantage of a glitch/trick, don't know where it belongs, that works in the way that when you hit the boss, you don't push him back but in the same direction as Batman faces. By doing it this way I killed the boss 11 frames faster but I just gained 10 on the whole boss cause of a stupid counter rule.

Improvements came from punching in the air after a wall jump to make Batman stop in the air faster. Due to this I had to lose 5-6 frames on the first flame thrower.

Frames gained due to some better wall jumps.

The noteable things in this level is that I instead of jumping over the enemy on the conveyor belt I puch it which is faster. I'm quite surprised this was overlooked. I felt that I could have gained one extra frame on this level if I had worked a few more hours but since the boss had a counter rule I would lose that in either case, hope I'm excused.

Second boss, each component has 17 HP

Due to a global counter that that controlls the shots of the components at the bottom I manage to kill in a little more efficient way.

Those jumping creatures are a pain their jumping depends on the same global counter as well, and in one place I had to stop for 2 frames - there was simply nothing else to do - life's unfair.

Here the jumping creatures where nicer which this level very easy to go through. Gained 1 frame, probably due to lag reduction.

The 5 frames was all gained due to lag reduction. I think Jecy's wall jumping already was perfect.

Here I got the biggest improvement in the whole run. Basically I killed the boss before his third jump while Jecy killed him when he almost had landed it. I have to say this fight looks really simple, but I can tell it's many absolutely frame precise movements that lead to this improvement.

The lag level - oh yeah! A bad jumping creature at the beginning forced me to shoot an extra 3-way at him which ofcourse created lag, if you don't kill him you'll soon face a mega lag. I had however been able to regain every single one of the lost frames when the level was over.

Most improvements here was because of a different way of handling the scenario with the third flame thrower.

You'll maybe notice that I'm playing a little suboptimal at the beginning of the level, this is becase I'm waiting for the electricity to disappear. The lost frames came from various places with where affected by the earlier mentioned counter.

Once I started hitting the left square, I didn't leave it alone very much:)

Not surprisingly the most improvement on this level comes from the very laggy situation at the lower right corner. By killing one of the blue enemies I get much less lag when I had jumped to the second floor.

Main task is to get inside him as fast as possible, the time gained came from more continious punching.

Undoubtly the easiest boss to TAS, improvents from doing one less jump and better planing of ending the input.

Jecy - for his run teaching me so many crazy tricks, which I took to a new level - kinda:)
FODA - who (as far as I know) discovered the glitch/trick to use at the first boss. This did not only saved me 11 frames on that boss but also got me a better counter value at the second boss.
JXQ - for his Quickhex program, which unfortunately didn't work very good at this game but at least saved me more working time than this sentence took to write.
NesVideoAgent: Hi! I am a robot. I took a few screenshots of this movie and placed them here. Oh! I also corrected the ROM name. 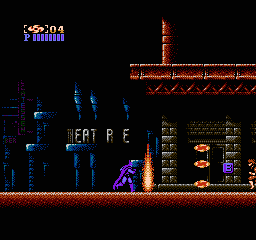 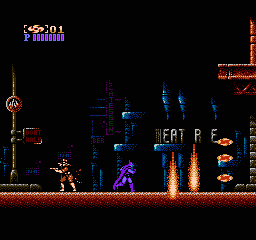 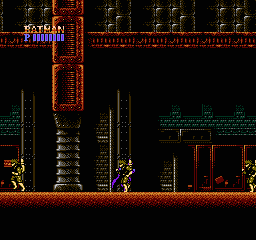 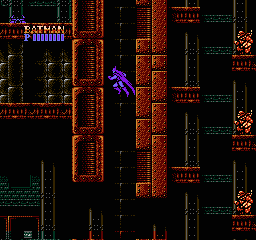 No fault of yours, but the stopping to jump started to piss me off after a while. Or it could be that I'm suffering through a 3 hour class at 7pm. In any case, it's not the best game, but the run of it looked pretty near perfect. Would be curious to see how much faster it would be with taking damage though. Yes for a good improvement.
Living Well Is The Best Revenge My Personal Page
Posted: 1/30/2008 1:25 AM
Quote

Joined: 5/1/2004
Posts: 4096
Location: Rio, Brazil
IMO, it is the best game :) j/k, only one game can be the best game, and that is SMB3. About the movie, I can't watch it. But I read all the comments and I'm impressed, this game really deserves such dedication! About the 1st boss glitch, I vaguely remember something about that, dunno... I'd have to search in the forum's obscurity to confirm if I did find that or not. I guess this submission is a win/win situation, good improvement, good game... I'd like to see it published.
aka Nesrocks http://www.youtube.com/user/UoBtExFODA https://nesrocks.com https://twitter.com/bitinkstudios
Posted: 1/30/2008 3:27 AM
Quote

HD encode Link to video
Warning: When making decisions, I try to collect as much data as possible before actually deciding. I try to abstract away and see the principles behind real world events and people's opinions. I try to generalize them and turn into something clear and reusable. I hate depending on unpredictable and having to make lottery guesses. Any problem can be solved by systems thinking and acting. If TASing is meta-play, TASVideos Movie Rules are meta-meta-play!
Posted: 10/23/2010 3:47 PM
Quote

http://ru.twitch.tv/sinisterwon/c/1777451
Warning: When making decisions, I try to collect as much data as possible before actually deciding. I try to abstract away and see the principles behind real world events and people's opinions. I try to generalize them and turn into something clear and reusable. I hate depending on unpredictable and having to make lottery guesses. Any problem can be solved by systems thinking and acting. If TASing is meta-play, TASVideos Movie Rules are meta-meta-play!
Posted: 12/21/2012 7:05 PM
Quote

Editor, Experienced Forum User
Joined: 12/27/2018
Posts: 7
https://youtu.be/nDM4JLj0M5c <-- has Emulator in it, see my other post for the video that's just the console feed. I got this to console verify. I had to add a couple of additional frames, I had to add one at the start and one before the second boss fight, to get things to work properly on a physical NES. Sorry about the laggy FCEUX playback, apparently my laptop can't handle emulation and video recording at the same time.
Discord: TheDot I built my own replay device, using an arduino uno connected to some shift registers. I've been making heavy use of the dump scripts in dwangoAC's github.
Posted: 1/1/2019 9:38 AM
Quote

Editor, Experienced Forum User
Joined: 12/27/2018
Posts: 7
I do now: https://youtu.be/AxkXrOu5IqQ Edit: removed period at end of yt link.
Discord: TheDot I built my own replay device, using an arduino uno connected to some shift registers. I've been making heavy use of the dump scripts in dwangoAC's github.