Here, for your viewing pleasure, is my run of the Lion King for the Sega Genesis. The run itself is 2294 frames faster (38.23 seconds) than the currently published run by Dan. The Lion King is one of favourite games for this console; visually and musically it is one of the most beautiful, the gameplay is very responsive and tight and the difficulty is very high (and misleading for a Disney game). The plot of the game is faithfully (for the most part) based on the movie of the same name. Being a huge fan of the movie and the game I was drawn to doing this TAS and am glad I was able to churn one out. I began this project almost immeadiately after submitting Majora's Mask and was not prepared for how challenging a TAS it would be (this project was very redotastic). The improvements come from a couple of new tricks, new routes, a dash of new glitches, all seasoned with better precision.

I'll list here only the main and obvious improvements.

Aqfaq: Extra special thanks to this man. Thanks for advice, tips and for discovering most of these tricks. I'd also like to thank you for your WIP of the first few levels. This is as much your run as it is mine.
Dan: Cheers for your movie. I used it for comparison at many points and I hope you enjoy the results!
Frezy_Man Of SDA: Thanks for your speedrun. I wasn't aware of the shortcut in The Elephant's Graveyard which saved a nice few seconds.
Grizzly Of vgmaps: Thanks for the level maps. They were invaluable for route planning.
Enjoy!!
adelikat: Accepting for publication as an improvement to the published movie.
NesVideoAgent: Hi! I am a robot. I took a few screenshots of this movie and placed them here. I'm not sure I got the right ROM though. (I tried Lion King, The (W) [!].gen, which was the closest match to what you wrote.) Well, here goes! Feel free to clean up the list. 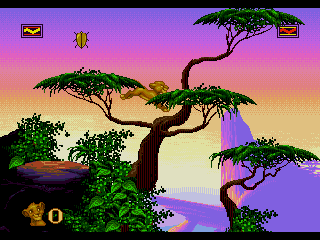 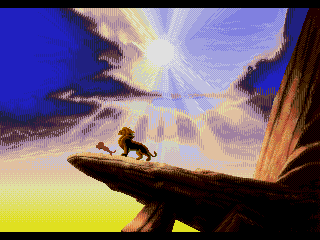 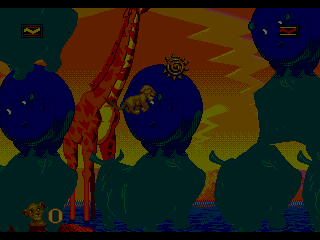 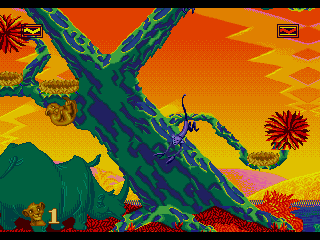 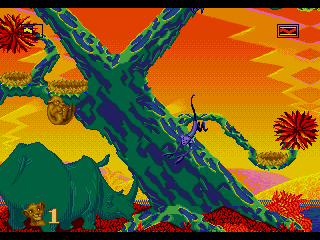 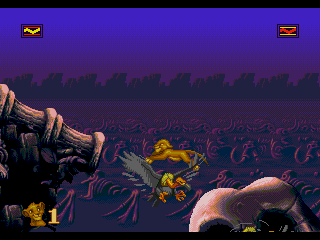 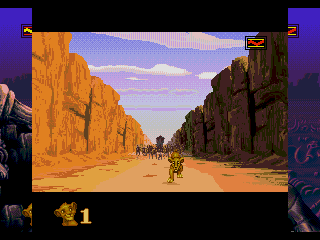 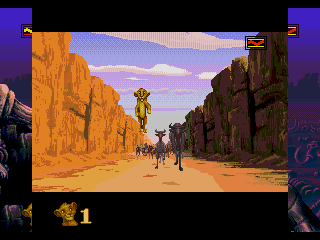 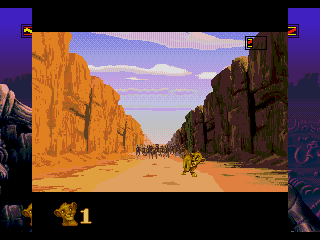 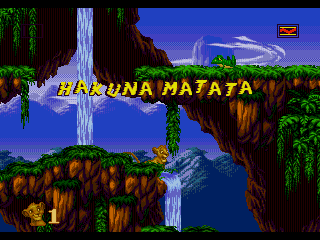 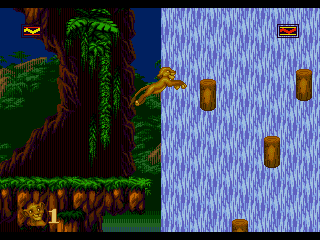 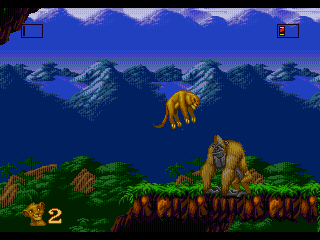 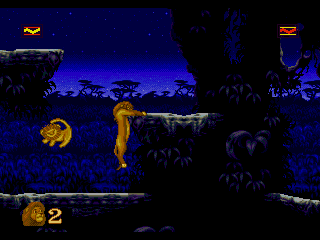 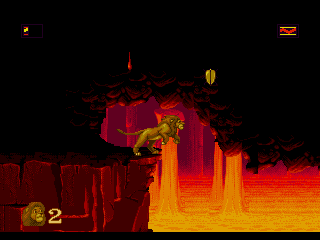 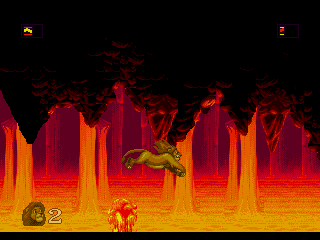 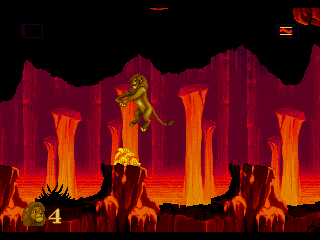 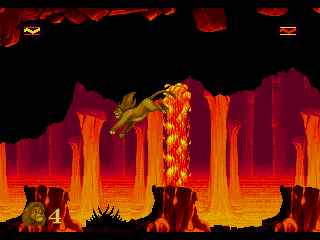 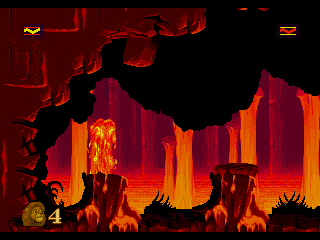 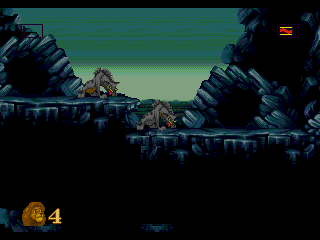 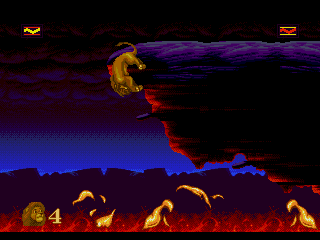 Nice improvements. I was hoping to see the published movie improved. Yes vote.
It's hard to look this good. My TAS projects
Posted: 4/9/2008 5:56 AM
Post subject: Wow/phew/oh/heh/well/anyway... Yes-vote.
Quote

Wow, thanks! Phew, I'm relieved you finished it finally, Lion Mukking. Well done! Oh, there was some lag in the lava level (in the part where you needed to wait for your ride) but maybe it was unavoidable or a result of speed/entertainment trade-off? To me it seemed to be the many bats and some hyenas nearby that caused a lot of action on-screen and then some lag. Heh, it was funny how you lured the hyena into the lava. It sank so fast that it did not even splash! Well, it is a superb TAS. Just like Contra without the armed wolf and exploding robots, so only slightly less entertaining. Technically, I can't imagine this being improved below 14 minutes without some serious jungle-bungle-bugs. Mukki is really careful with small details. Anyway, there exists some tricks that fail only barely, so the future of this movie is still open for surprises, as always.
Posted: 4/9/2008 9:09 AM
Quote

Joined: 1/2/2007
Posts: 188
Location: Germany, Munich
Amazing as usual. I like how you handled the stampede and all the little details you took care of (input animation, perfect timed jumps on the ostrich, roaring at beaten enemies, jump glitch in hakuna matata, etc.) The boss fight in "be prepared" must have been really tedious ^^ PS: The movie file somehow failed to deliver the final blow to scar. But I think the problem is rom I used.
Posted: 4/9/2008 2:40 PM
Post subject: Re: Wow/phew/oh/heh/well/anyway... Yes-vote.
Quote

Yeah, it was mainly the bats. I could've killed them earlier and reduced the lag, but that would've made the wait less interesting as I would've only had the leopard to play with. If you know the game well you'll agree that those bats are really irritating so I thought that dodging several of them plus a leopard whilst so close to instant death lava was much more intersting. Also, the leopard's pouncing animation added to the lag, which could theoretically be reduced, but avoiding it would mean that I couldn't make it dive into the lava. The lag still only costs a few frames and I didn't think it was so noticable. Boo! I couldn't disagree with you more :P I dislike the SNES version's sound, but I think this game sounds great (apart from the thunderbolts in the last level).
http://tasvideos.org/Mukki.html
Posted: 4/9/2008 3:32 PM
Quote

Joined: 10/6/2007
Posts: 330
Location: B.C Canada
I vote yes. I only played the SNES version, but the Genesis version seems the same except for the music and sound effects. I really liked this run, and I loved how easily you climbed the waterfall on those logs. That part always takes forever for me.
http://www.youtube.com/user/PekoponTAS 18 coins?!
Posted: 4/9/2008 5:47 PM
Quote

Joined: 10/3/2005
Posts: 1332
Likewise. I think it's because I didn't sacrifice a goat in Upthorn's honor last solstice. Emulator voodoo aside, the run had a lot of entertaining scenes, such as Simba mauling the hell out of everything toward the end. Stage four could possibly have been more stylized, but it's hard to say. Yes vote and a bag o' chips.
Posted: 4/9/2008 6:04 PM
Quote

Here's a screenshot suggestion for the upcoming publication, full of suspense:

HD encode http://www.youtube.com/watch?v=P0skGx-kwlc
Warning: When making decisions, I try to collect as much data as possible before actually deciding. I try to abstract away and see the principles behind real world events and people's opinions. I try to generalize them and turn into something clear and reusable. I hate depending on unpredictable and having to make lottery guesses. Any problem can be solved by systems thinking and acting. If TASing is meta-play, TASVideos Movie Rules are meta-meta-play!
Posted: 1/24/2020 2:30 PM
Quote

Youtube: https://mega.nz/#!js8RzIKR!oUGeVvysjZd61uCvQP6unPzuQxFUG177Outq_0kYFOU Downloadables: https://archive.org/details/thelionking-tas-mukki
[14:15] <feos> WinDOES what DOSn't 12:33:44 PM <Mothrayas> "I got an oof with my game!" Mothrayas Today at 12:22: <Colin> thank you for supporting noble causes such as my feet MemoryTAS Today at 11:55 AM: you wouldn't know beauty if it slapped you in the face with a giant fish [Today at 4:51 PM] Mothrayas: although if you like your own tweets that's the online equivalent of sniffing your own farts and probably tells a lot about you as a person MemoryTAS Today at 7:01 PM: But I exert big staff energy honestly lol Samsara Today at 1:20 PM: wouldn't ACE in a real life TAS just stand for Actually Cease Existing