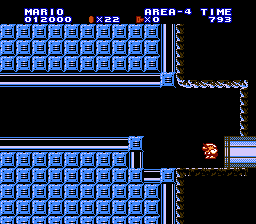 Watch Download (.fcm)
Author notes Discuss
7.48 / 10
Extra Mario Bros. is a hack of the original Super Mario Bros. It is noteworthy for being a complete "Metroidvania" game built around the original SMB engine, with very few changes to the engine itself. The five areas in the game are all interconnected (via pipes, naturally), and permanent upgrades have been added to give it a more Metroid-ish feel. (Did I mention the music from Super Metroid? Because there's music from Super Metroid.)
However, despite his newfound ability to return to levels he's visited before and acquire upgrades that don't go away when he dies, Mario still cannot scroll to the left.
This movie collects all of the keys and fights the true final boss but only collects two of the upgrades.
Note: An IPS patch for the hack can be downloaded here.
Published on 8/9/2009 12:00 AM
See full publication history
Game:
Extra Mario Bros.
Genres:
Platformer
Unofficial game