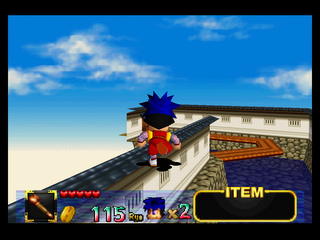 Watch on YouTube
Author notes Discuss
5.33 / 10
Mystical Ninja, otherwise known as Ganbare Goemon, is one of Konami's longest-running series, yet remains mostly localised to Japan (thanks in part to cultural differences; the series is very Japanese). This is the first of three games for the series released for the N64.
What begins as a quest to investigate an attack on a castle quickly evolves into a race to stop a plot to transform Japan into... a giant stage.
Published on 2/10/2010 12:00 AM
See full publication history
Game:
Mystical Ninja Starring Goemon
Genres:
Adventure