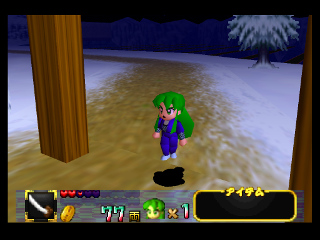 Watch on YouTube
Author notes Discuss
7.34 / 10
Published on 9/10/2014
Mystical Ninja, otherwise known as Ganbare Goemon, is one of Konami's longest-running series, yet remains mostly localized to Japan (thanks in part to cultural differences: the series is very Japanese). This is the first of three games in the series released for the N64.
What begins as a quest to investigate an attack on a castle quickly evolves into a race to stop a plot to transform Japan into... a giant stage.
In this run, a lot of new tricks and some big glitches combine to shave over an hour off the previous publication.
Obsoletes:
N64 Mystical Ninja Starring Goemon by zggzdydp in 2:04:49.35

Emulator Replay:
mupen64-rr 8
Download (.m64)
Webmasters, please don't link directly to the files. Link to this page or the front page instead.
Republication of movies from this site is only allowed under the following conditions:
Do not label them with speculations. If unsure, ask the site staff for details.