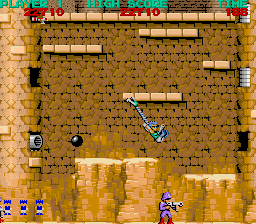 Watch Download (.fbm)
Author notes Discuss
6.23 / 10
Before reminiscing about a man I knew when I was young, before rescuing a hero named Joe, there were games where you played as Joe himself! The Bionic Commando arcade game, sequel to Commando, introduces the first hero in a platform game who couldn't even jump, which spawned many sequels.
Just when you thought all the early Bionic Commando games were TAS'd and done with, Mukki brings Bionic Commando back to life, as if it were a long dead World War II dictator resurrected by a madman as part of a plan for world domination.
In this game, Mukki demonstrates grappling and kicking ability, whilst avoiding hordes of soldiers futilely attempting to prevent Joe from doing his duty and destroying their weapons of medium sized destruction.
Published on 9/12/2010 12:00 AM
See full publication history
Game:
Bionic Commando
Genres:
Action
Platformer

Emulator Version:
FBA v0.0.3.03
Webmasters, please don't link directly to the files. Link to this page or the front page instead.
Republication of movies from this site is only allowed under the following conditions:
Do not label them with speculations. If unsure, ask the site staff for details.