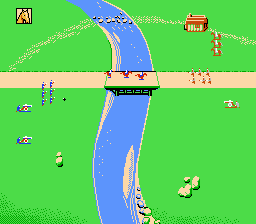 Watch Download (.fm2)
Author notes Discuss
4.64 / 10 Votes: 7
North & South is a humorous, cartoony kind of game about an incredibly bloody war. In it, you move army units around on a board until you approach your opponent, at which point a battle phase occurs. The author, Chamale, taking control of the North, fights a mere two battles to complete the game in 01:20.02, preserving the union. Poor horses...
Published on 11/8/2012
See full publication history
Game:
North & South
Genres:
Action
Strategy