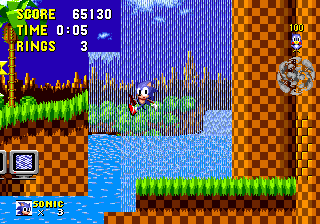 Sonic bounces around surprisingly fast. The lack of Spin Dash makes the strategy a bit different from that of Sonic 2 and Sonic 3 & Knuckles runs, since preserving your momentum becomes a lot more important. However, this doesn't prevent the author from achieving crazy velocities even with such a significant limitation. In this run, the game is completed without collecting any emeralds.
This is the seventh run of this game, improving on the previous effort by 01:01.66 (of in-game time) with the use of new zips and improved precision.
To see a movie of this game that doesn't take advantage of zips, watch the "no zips" run by Aglar.
Spoiler: hover over the screenshot.
Every second encode link leads to a camhacked version. But don't expect the videos where Sonic is visible offscreen to make more sense than the original ones!
Published on 7/2/2013
Obsoletes:
Genesis Sonic the Hedgehog by Aglar, marzojr in 15:04.43

Tags:
Aims for in-game time instead of real-time
Takes damage to save time
Heavy glitch abuse