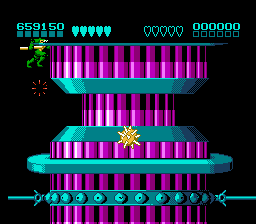 Watch Download (.fm2)
Author notes Discuss
8.32 / 10 Votes: 13
Battletoads (1991) is a futuristic beat 'em up game known for its extreme difficulty spread over 12 difficult levels. The mechanics in the game also change drastically from level to level, making the game one of the hardest and most varied for the NES.
In this game, the second most diabolical evil genius in the universe, The Dark Queen, has kidnapped Princess Angelica and Pimple - a battletoad. Rash and Zitz must save them by traveling through the most insane multilevel set of plans ever designed. This includes falling down huge shafts, racing through obstacle courses at breakneck speeds, riding on snakes through a massive maze of spikes, passing through a killer ventilation system, navigating through a missile defense system, climbing a never ending revolving tower, and much much more. Along the way, the Battletoads must also face off against an evil army of robots, genetically engineered rodents, and The Dark Queen herself.
In this run, feos, Alyosha, and Samsara improved upon the previous publication by 02:39.34 using many new tricks and glitches.
Published on 4/17/2016
Obsoletes:
NES Battletoads "warpless, 1 player" by Phil, Genisto in 24:20.12