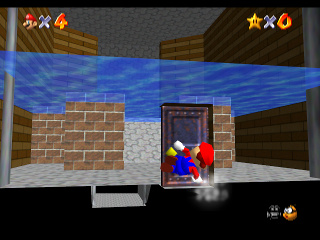 Watch Download (.m64)
Author notes Discuss
8.97 / 10 Votes: 28.5
At first there were 70 stars, because Bowser demanded it. Then there were 16 stars, because MIPS the Rabbit demanded it. Then there was 1 star, because Bowser's Sub demanded it. Then there were no stars, but 2 keys, because the door leading to the castle basement demanded it. Now there is 1 key because the viewers are impatient and demanded the game be quicker.
As with many other runs on this site, the goal of pure speed has resulted in the complete breaking of the game. Very little of the game's normal play remains. If you'd like to see more of what Super Mario 64 has to offer, see the "70 Stars, no BLJ" run or the "120 Stars" run.
This movie is 2457 frames faster than the previous movie due to the recently discovered and long sought after 'Moat Skip', new strategies and extreme optimizations made possible by parallel universes as explained in the submission text.
Super Mario 64 has a history of publications on this site. If you wish to see how it unfolded since the beginning, see the page SM64TASHistory. Also, if you have a hankering to see MIPS the rabbit, the 16 stars route has been improved.
You can also see this movie played back on a real console.
Or, if you're looking for a TAS on the Nintendo DS remake, you can watch it here.
Downloadable encodes are also available in 640x480 resolution:
MKV
512kb MPEG4
Published on 11/24/2016
Obsoletes:
N64 Super Mario 64 "0 stars" by snark, Kyman, sonicpacker, MICKEY_Vis11189, ToT in 05:02.25

Emulator Version:
Mupen64 0.5 Re-Recording v8
Webmasters, please don't link directly to the files. Link to this page or the front page instead.
Republication of movies from this site is only allowed under the following conditions:
Do not label them with speculations. If unsure, ask the site staff for details.