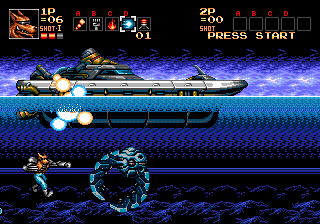 Watch Download (.gmv)
Author notes Discuss
8.57 / 10 Votes: 3
Contra: Hard Corps is the only game of the Contra series released on the Genesis / Mega Drive console. In this game, you get to choose between four characters, each with different abilities and weapons. The Japanese version was chosen because, for some reason, it gives the players a health bar, allowing them to take some damage without dying.
You can also get several different endings, based on which choices you make at several points. In this movie, the author takes the "best ending", which is the only ending that rewards the player with a "GOOD JOB!" screen at the end. There is also a run which obtains a worse ending but still shows off a number of the game's stages. There is also a run which gets the secret ending.
In this movie, Soig improves his previous effort by 12.76 seconds.
Published on 12/26/2018
Obsoletes:
Genesis Contra: Hard Corps "best ending" by Soig in 17:36.97

Tags:
Best ending
One player in a multiplayer game
Takes damage to save time