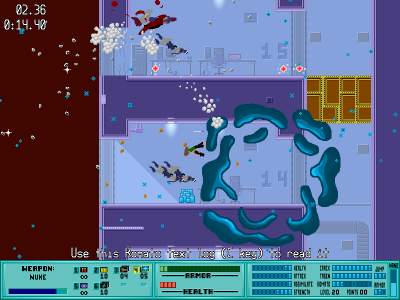 Watch Download (.wtf)
Author notes Discuss
5.78 / 10 Votes: 4
Iji is a freeware game released by Daniel Remar in 2008. Quoting his website, where the game can be downloaded: "Iji is an action-packed strategic platform shooter with a detailed story, large levels with multiple paths, powerful bosses and lots of secrets. There are alternate gameplay events, dialogues and scenes depending on what you do, a wealth of extras and bonus features, and seven stats to upgrade through a leveling system. Iji herself has superhuman strength and abilities, and can crack Nanotechnology, use her enemies' most devastating weapons against them, and be a pacifist or a killer - the story adapts to how you play."
Matslo123 collects everything that can be collected in a single playthrough (all posters, ribbons and superchages, Yukabacera's scrambler, the trapmine, the banana gun and all armor and jump upgrades) and clears the game in record time.
Published on 6/9/2019
See full publication history
Game:
Iji
Genres:
Action
Adventure
Platform