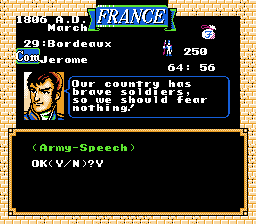 Watch Download (.bk2)
Author notes Discuss
5.36 / 10 Votes: 4
L'Empereur is a military strategy game. The game takes place during the violent aftermath of the French Revolution and follows the rise and fall of Napoleon Bonaparte who became one of the most popular and charismatic leaders of France.
You start as an officer in charge of the military and local city affairs. Later in your career, you become the French First Consul and finally the Emperor and take up the responsibilities that come with it. You can only rise in rank if you have gained the support of the people.
Jigwally corrupts save data during a mid-frame reset to complete the game in record time.
Published on 11/10/2019
See full publication history
Game:
L'Empereur
Genres:
Strategy