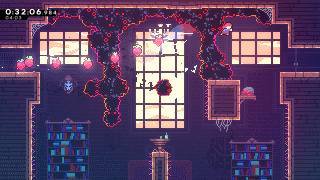 Published on 12/25/2019
This is it, Madeline. Just breathe. You can do this.
Celeste is a platform game released in 2018 and developed by independent game studio Extremely OK Games, who also developed TowerFall Ascension. It features Madeline, a young girl who sets on a journey to reach the summit of the titular mountain. Can she survive the many dangers that await her on her ascent?
This time, EuniverseCat, fishmcmuffins, keylie, dahlukeh and Lanvilla collect all 175 red strawberries, the moon berry, all 24 crystal hearts, all B-Side cassette tapes as well as completing every chapter (which also includes the B- and C-Sides as well as the recently released Farewell chapter) in a record in-game time of 1:16:51.335.
There is also an alternate YouTube stream featuring audio commentary by EuniverseCat, fishmcmuffins and Chaikitty, a speedrunner of the game.
See full publication history
Game:
Celeste
Genres:
Platformer

Emulator Replay:
libTAS 1.3.5
Download (.ltm)
Webmasters, please don't link directly to the files. Link to this page or the front page instead.
Republication of movies from this site is only allowed under the following conditions:
Do not label them with speculations. If unsure, ask the site staff for details.