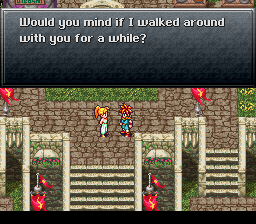 Watch Download (.smv)
Author notes Discuss
5.64 / 10 Votes: 13
Chrono Trigger is a long RPG that typically takes hours to days to complete. We already have one tool-assisted speedrun of this game.
However, this movie is different, because it starts from New Game +, which means that the equipment and character stats are preserved from a previous game completion. This run uses a save file which is specifically optimized for an optimal New Game + completion of the game; thus this run should be considered more a concept demo than a rule-conforming TAS.
This beats the game with perfect characters and best equipment in a very short time. The actual time from power-on until the death of the last boss is only about 7.5 minutes, but the ending demo does not start until the Dream Team scene (part of the ending) is completed.
The micro gate in the rightside teleporter is only available in New Game +.
In this quick update, Crono and Marle are equipped while shopping rather than calling up the game's menu.
Published on 4/23/2007
Obsoletes:
SNES Chrono Trigger "newgame+" by Saturn in 09:34.82