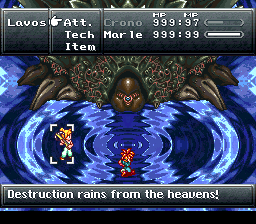 Watch on YouTube
Author notes Discuss
5.64 / 10
Chrono Trigger is a long RPG that typically takes hours to days to complete. We already have one tool-assisted speedrun of this game.
However, this movie is different, because it starts from New Game +, which means that the equipment and character stats are preserved from a previous game completion. This run uses a save file which is specifically optimized for an optimal New Game + completion of the game; thus this run should be considered more as a concept demo than as a rule-conforming TAS.
This beats the game with perfect characters and best equipment in a very short time. The actual time from power-on until the death of the last boss is only about 7 minutes, but the ending demo does not start until the Dream Team scene (part of the ending) is completed.
The micro gate in the right-side teleporter is only available in New Game +.
In this 22.71-second improvement to the previous version, menu screens are entered in screen transitions to save time. Other improvements were also found.
Published on 8/17/2007 6:17 PM
Obsoletes:
SNES Chrono Trigger "newgame+" by Saturn in 09:29.83