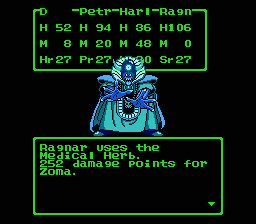 Watch on YouTube
Author notes Discuss
5.78 / 10
This is a non-glitched run of Dragon Warrior 3, now under 2 hours long.
This game is known in the TAS world as being a pain to play due to the RNG (random number generator) being much harder to manipulate than most other games. As a result, seemingly random actions throughout the game are actually intentional manipulation of the RNG to ensure favourable outcomes, such as avoiding monsters or good battle outcomes.
To give you an idea of how surprising this time is to most players, the previous run is about 24 minutes longer than this one. Even before that, any run that was under 3 hours long was deemed to be very difficult to perform.
Published on 7/31/2007 12:00 AM
Obsoletes:
NES Dragon Warrior III by dave_dfwm in 2:14:07.67

Emulator Replay:
FCEU 0.98.15
Download (.fcm)
Webmasters, please don't link directly to the files. Link to this page or the front page instead.
Republication of movies from this site is only allowed under the following conditions:
Do not label them with speculations. If unsure, ask the site staff for details.