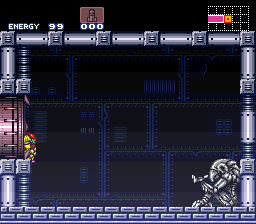 Watch on YouTube
Author notes Discuss
8.4 / 10
Super Metroid (1994) is widely considered to be the pinnacle of exploration-driven game design, and limits to the freedom of action it allows are yet to be found. As such, surprising improvements come from a lot of esoteric tricks and optimizations, quickly making seemingly optimal movies obsolete.
This is hero of the day's second attempt at this game, improving his previous movie by 85 seconds. A good bulk of the improvement comes from skipping Torizo, implementing additional continuous walljumps, and better boss fights. As previously, only 18% of items are collected.
As with most movies at TASvideos, this one aims for lowest frame count, as opposed to the lowest in-game time. By internal timer, it completes the game in 24 minutes and 16 seconds. Read about the specifics of in-game timing here.
If you prefer going by the lowest in-game time, be sure to check Cpadolf's any% in 23:45.
The encode without door transitions is available here on YouTube.
Published on 3/2/2008 12:00 AM
Obsoletes:
SNES Super Metroid by hero of the day in 40:57.85