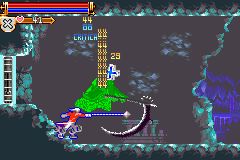 Watch on YouTube
Author notes Discuss
7.73 / 10
Published on 3/22/2011
In this game, the player controls Juste Belmont, one of the later descendants of the Belmont clan. The goal of the game, as usual for Castlevania games, is to defeat Dracula in his castle. Along the way, some bosses are beaten, and some abilities and items are obtained. Furthermore, to obtain the best ending, Juste is supposed to acquire all of Dracula's remains and Maxim's bracelet.
In this branch, the author forgoes the "wall-sinking" glitch (used in this movie) which would allow Juste to warp to far-away places. Thus, this movie shows off more of the game.
We also have movies featuring the unlockable character Maxim, with wall-sinking or without.
See full publication history
Game:
Castlevania: Harmony of Dissonance
Genres:
Action
Platformer
RPG