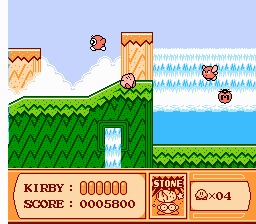 Kirby's Adventure is a colorful game that's very long for a NES title. However, a bug was discovered which caused unpredictable results (including triggering the credits) upon using the Stone power while entering the water.
This movie saves over five minutes from its predecessor. This is because instead of playing multiple levels to reach a spot for the glitch, a new wall-clipping trick is used in the third room of the very first level.
This movie was also the result of an intense frame war that spawned over a dozen attempts and ultimately resulted in an improvement of over 3 seconds of the initial attempt.
This movie has two YouTube encodes. The primary version has deliberately glitched ending graphics, whereas the second one displays proper graphics. Both versions have identical input except for the last frame.
Published on 6/22/2013
Obsoletes:
NES Kirby's Adventure "game end glitch" by MUGG in 05:44.57