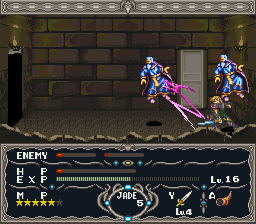 Watch Download (.bk2)
Author notes Discuss
5.73 / 10 Votes: 7
Dragon View is a side-scrolling role-playing video game released for the Super Nintendo Entertainment System in November 1994. Released in Japan as Super Drakkhen and otherwise known as Drakkhen II, it is meant to be a prequel to Drakkhen although it bears little resemblance to its predecessor. It uses the same pseudo-3D overworld system for which the series is most famous. Other features of Dragon View are its side-view action role-playing game (RPG) hybrid gameplay (used when exploring more detailed areas such as towns and dungeons), its well-translated first person storyline, and its emphasis on player-driven undirected exploration.
In this run, Khaz makes the game realize how boring it really is, and has it jump straight to the credits roughly halfway through the intended story. A side effect of this particular glitch is the cutscene after the credits getting glitched out and having the main character walk in place, forever.
More information on how this was achieved can be found in the submission notes.
Published on 10/3/2014
Obsoletes:
SNES Dragon View "game end glitch" by Khaz in 1:01:01.92

Emulator Version:
Bizhawk v1.8.1
Webmasters, please don't link directly to the files. Link to this page or the front page instead.
Republication of movies from this site is only allowed under the following conditions:
Do not label them with speculations. If unsure, ask the site staff for details.