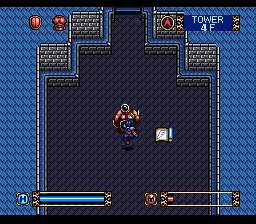 Watch Download (.bk2)
Author notes Discuss
4.38 / 10 Votes: 3
You control Varik (Ares in the Japanese version, which this TAS is on), who fell down into the ruins when Alexis chased him down and accidentally blew a hole in the ground. Now it's up to you to get Varik (Ares) back out, with no shortage of monsters along the way. You're not alone - There are many others who have also fallen, and are willing to sell items that may help you.
The game is in a top-down view, monsters move about in real time, and the game certainly has RPG elements in that you level up from defeating these monsters. You have three stats that increase separately from level, gaining strength by physically attacking, knowledge by hitting with attack spells, and magic endurance by being hit with magic. The controls are difficult to figure out, with one aspect being the same button that brings up your shield will also attack if you're standing in front of a monster, but once you figure it out, it's not that bad. To reach the end, you travel through over 40 zones, each bearing their various challenges with monsters or traps, and the occasional puzzle.
Osse101 beats a normally lengthy game in just 11 minutes and 12.19 seconds, thanks to various glitches that are only possible on the Japanese version. Please read the submission comments for more details. We also have a run on the English version that does not contain these glitches.
Published on 3/24/2018
See full publication history
Game:
Brandish
Genres:
RPG

Emulator Version:
Bizhawk 1.11.3
Webmasters, please don't link directly to the files. Link to this page or the front page instead.
Republication of movies from this site is only allowed under the following conditions:
Do not label them with speculations. If unsure, ask the site staff for details.